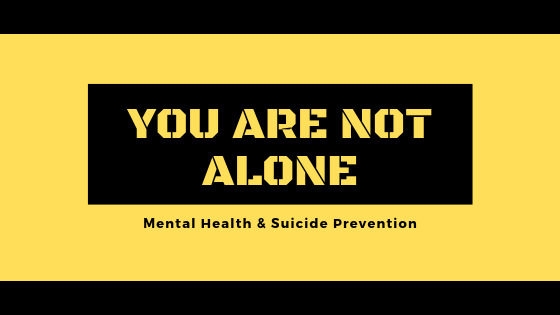 Something heartbreaking happened recently in my home community in New Brunswick- it has been weighing heavily on my mind for quite some time and as such I considered writing about it earlier on, but it wasn’t my story to tell.

Now that Maddy’s family has opened up about what happened and urged that her story be shared publicly far and wide, I feel comfortable writing about Maddy today and passing along the Murphy family’s message. I’ve included her father Mike’s post below: Maddy’s Story.

I live away from home now, so I only had a handful of opportunities to spend time with Maddy, but her life has touched my own. Maddy was a kind, funny, athletic girl, and my sister’s partner. She has left behind hundreds of people who fondly remember her dorky humour, love of animals, and easygoing attitude.

Her story is important not only because of her lasting legacy of kindness and love, but also because the way she left us was so shockingly unexpected, revealing the often silent yet intensely deep depths of depression. For a brief but agonizing time we were all waiting on breathing tests and brain scans, holding on to a slim hope that she would wake up in her hospital bed and have a chance at recovery, but we lost her.

It is immensely hard for the people left behind after suicide; I feel the pain of my sister so strongly, as well as that of my parents who have seen their beautiful daughter, who battles with mental illnesses of her own, crumble in response to the terrible news. Everyone struggles with a helpless feeling and the many painful questions that have no answers. I don’t know what to say or do other than to tell my family that I love them and I’m here for them, because there’s no getting around it- this is a horrible time. This is a new and painful reality that is hard to face- my father lost his best friend Jeff to suicide, so he understands the pain, and I hope he and Mom can help my sister heal. I’m very grateful for all of the friends, family, acquaintances, coworkers and everyone else who is supporting my sister right now as she grieves. I also hope my family can feel my love from afar, as I am thinking about them, and Maddy, constantly.

I’ve also wept for the people I’ve never met who are dealing with Maddy’s loss- her mother, her father, her siblings, all of her family and friends. I’m so sorry that this happened. It was overwhelming to see the huge number of people reaching out and sharing memories of their time with Maddy- clearly she will never be forgotten in the hearts and minds of so many people.

To Maddy’s family, and to my sister, thank you for sharing Maddy’s story. My heart is with you.

At the bottom of this post I have included some links, both Canadian and international, which offer support if you or someone you know is contemplating suicide or has been affected by a suicide loss. Please know you are never alone.

Be strong, everyone. Rest easy, Maddy.

Mental Health Commission: Toolkit for people who have been impacted by a suicide loss

Mental Health Commission: Toolkit for people who have attempted suicide

International Association for Suicide Prevention: Guides relating to helping someone who is suicidal in a variety of languages 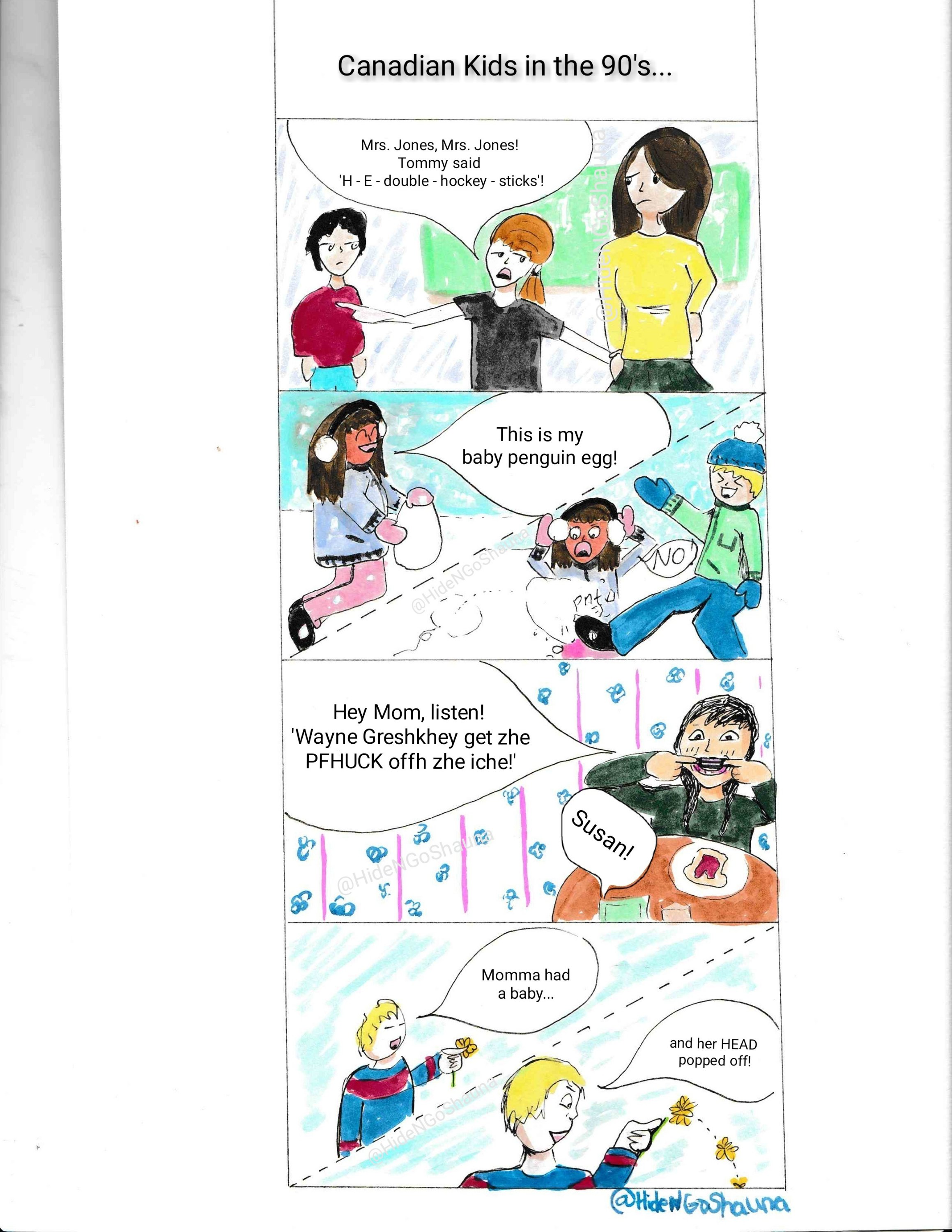 I’m visiting family in my hometown of Saint John, NB, and enjoying a few indulgences while I’m here. Last post I delved into Bob’s Corner Takeout. Today I want to show off another favorite spot in Saint John: the Freak Lunchbox. 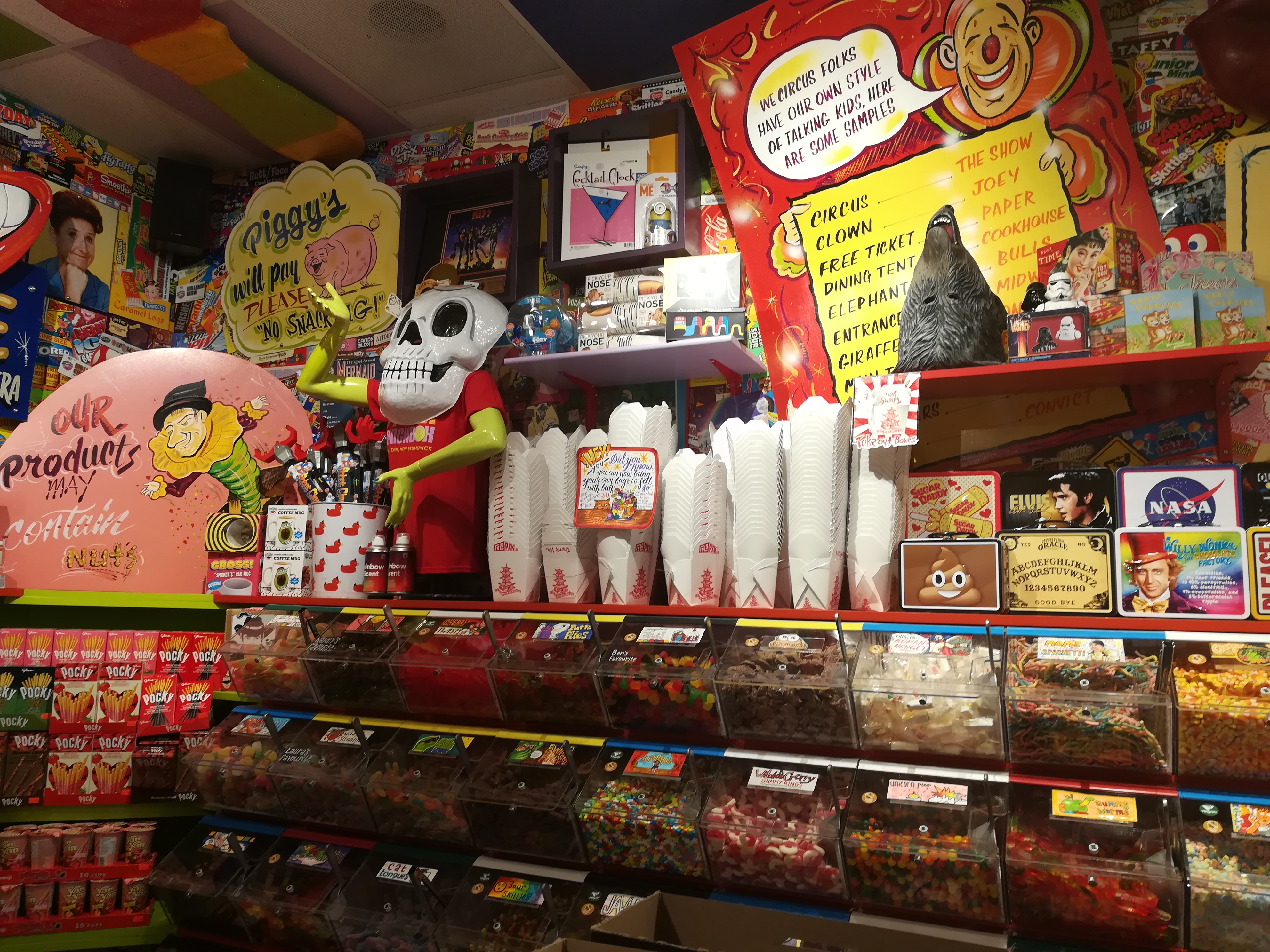 According to uptownsj.com, Freak Lunchbox is a family business that was founded in Halifax in 2001, “inspired by circus sideshows, roadside attractions and of course candy!”

The Freak Lunchbox location on King Street is tucked away across from Brunswick Square, near the harbour, in a small shop amidst historic buildings. The store is a claustrophobically colourful cave of sugar, novelties, and retro toys.

The bulk candies are all named after memes and pop culture references- Unicorn Poop, I Like Turtles, Mom’s (Rainbow) Spaghetti, Nuka Cola bottles, and more. Visitors can grab a baggie or a takeout box and fill to their heart’s content, or choose from a variety of rare and imported candies, sodas, and chocolates that are individually wrapped.

^I have a weakness for gummies, myself. 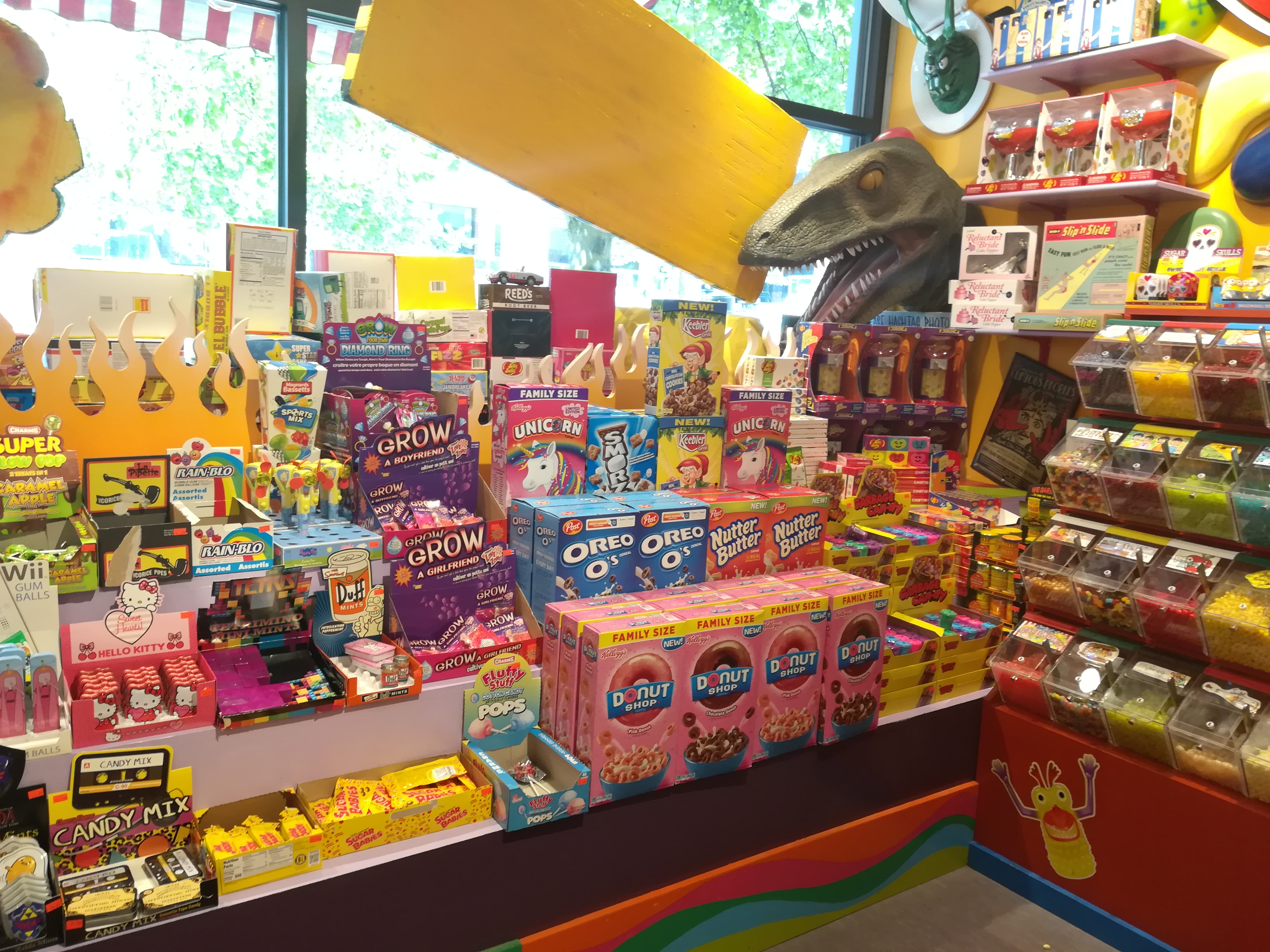 ^Check out the funky cereals and the giant raptor head!

While candy from the Freak Lunchbox is a bit pricier that what you might pay for sweets elsewhere, the place is still worth a visit for the wide variety and the kooky, kitschy atmosphere. I usually end up spending about $30- this time, for example, I left with a container full of gummies and nougat, 6 Cow Tails, a finger monster, and some plastic duck-feet.

Right now my hubby and I are visiting my family in New Brunswick, and every time we get home for a visit we try to make it to Bob’s. We popped over today for lunch. 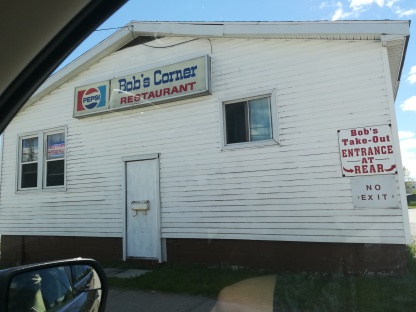 Bob’s Corner Takeout in West Saint John isn’t a flashy place- it’s what you’d lovingly refer to as a dive, a hole-in-the-wall, complete with worn picnic tables and an eclectic decor made up of an assortment of faded wall prints and taxidermied ducks. There is a cosy charm to the spot.

My family has been visiting Bob’s since I was a young kid- well, probably earlier than that, actually. According to this CBC article, Bob’s is a family business that has been going strong at this location since around since 1985, before I was born.

While you wait for your food, you can browse through stacks of magazines that will take you back a couple of decades or so.

Alternately, you can play an arcade game in the corner, or get out your quarters for the crank machines.

Most people, however, return to Bob’s time and time again for the authentic and laid-back feel of the place, and of course, the food. When you step into Bob’s you can immediately smell the oil, and hear it sizzling in the friers at the back. You can expect an affordable, satisfying meal.

The menu has barely changed since I was a little girl, if at all. I can’t help but get the whole clams every time. The clams, in their light, crunchy batter, dunked in a little tartar sauce, still taste just as I remember. 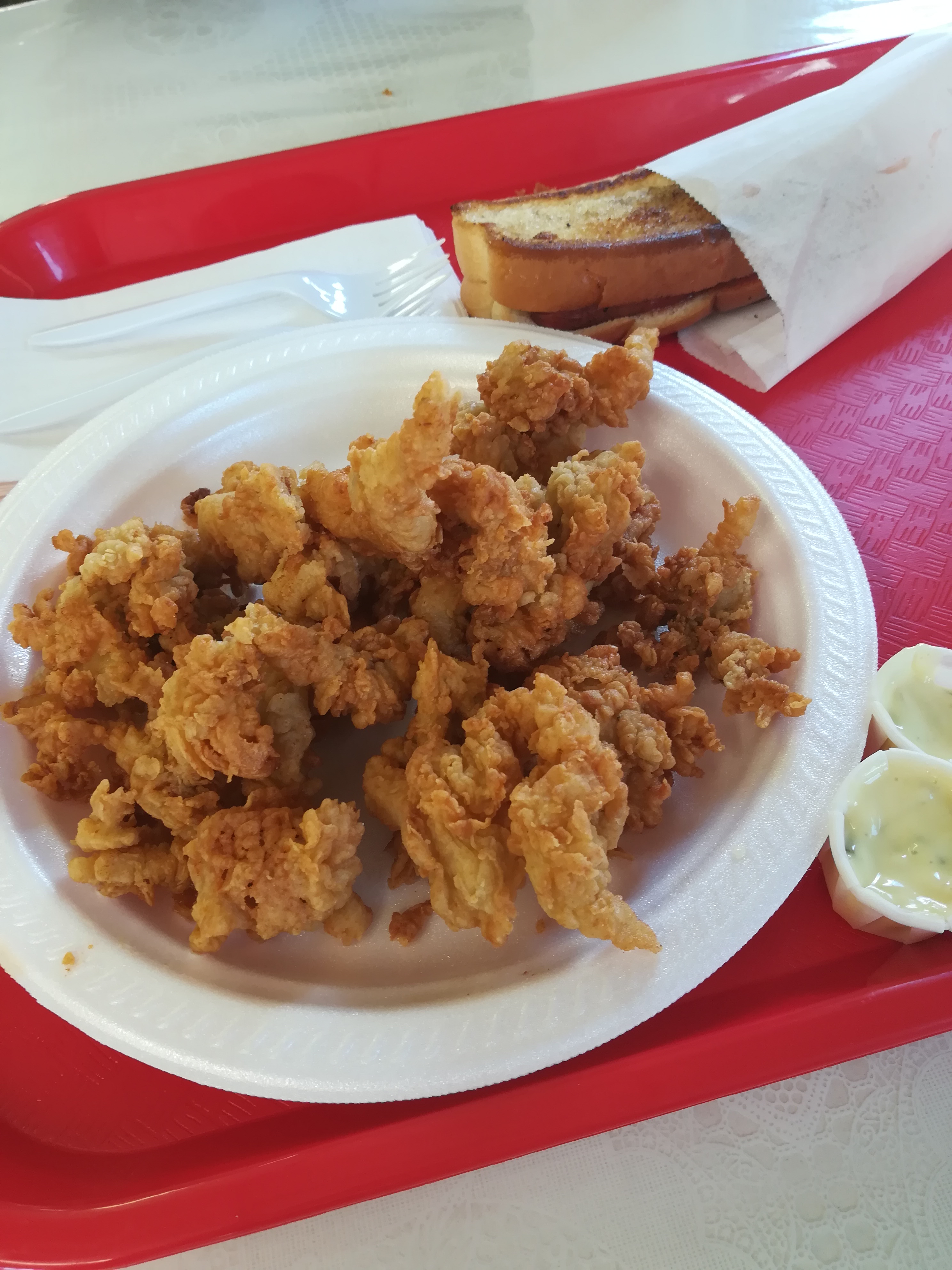 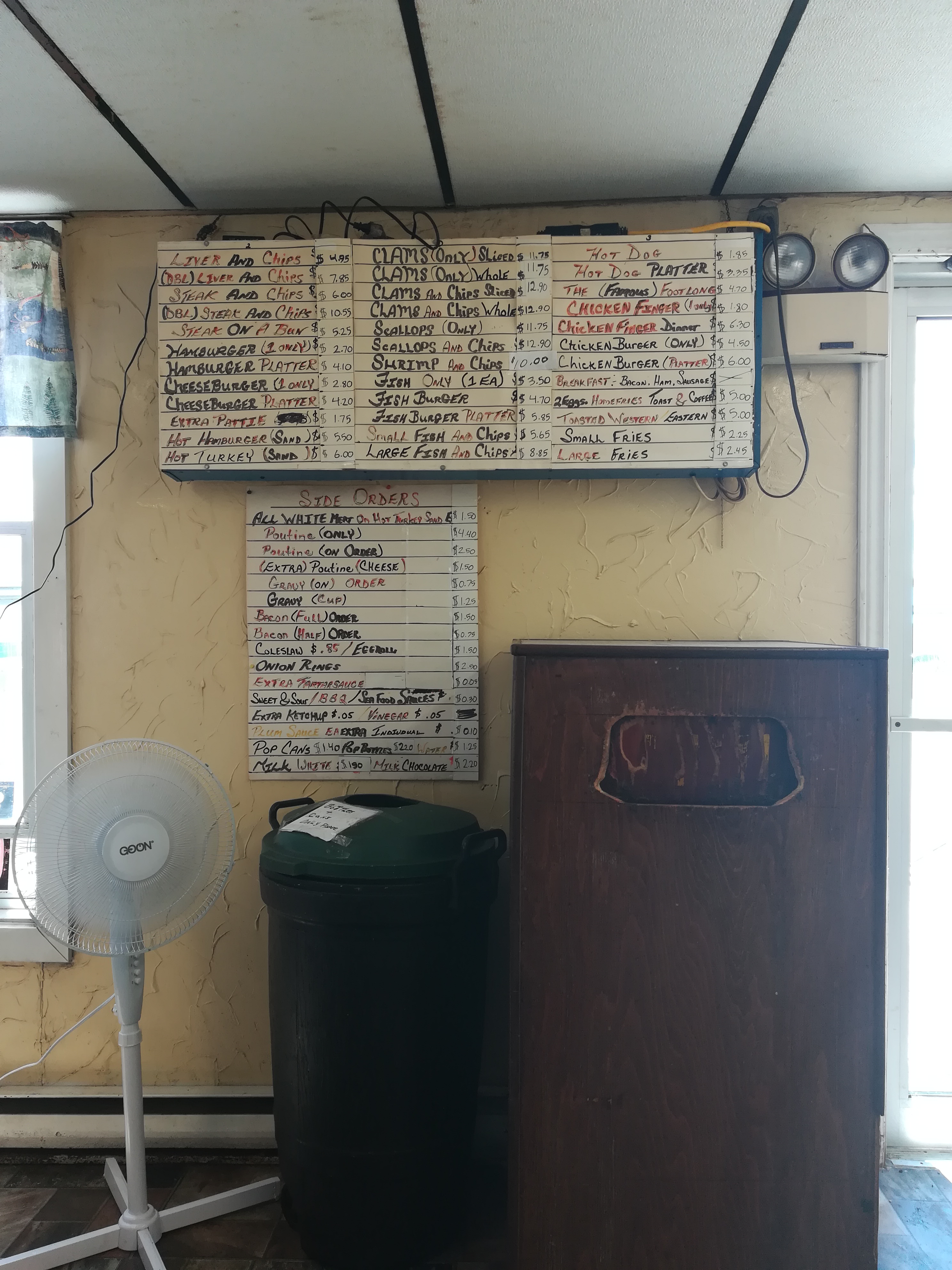 Dustin got the hamburger today, so I got to try a bite of that too, and it was also amazingly good- a proper “smash burger” Dustin called it. Soft bun, gooey cheese, and simply a real grilled burger taste.

Bob and his family have many loyal and devoted customers. While for my family Bob’s is a rare treat, many people are regulars, and Bob’s is somewhat of a local landmark . When I posted my meal on Instagram, a family friend who lives in Alberta commented “I’d push [your father] down the stairs for some Bob’s.”

Today I had the opportunity to partake in a simulated role-play workshop intended to raise awareness of the barriers and challenges of being homeless and/or living underneath the poverty line. The workshop, called the Community Action Poverty Simulation (CAPS) comes from the Missouri Community Action Network, and was offered by my local Poverty Reduction Network. As someone who works at a public library in Canada and spends a lot of time interacting with low-income and homeless patrons, I am glad that I had the chance to experience the workshop.

Each participant was randomly sorted into a group and directed to a cluster of chairs that would be their “home”, complete with a detailed synopsis of each family member and the overall situation of the household, including incomes, debts, medical considerations, assets, and expenses. Those without a home were directed to the homeless shelter space. I took on the role of Albert Aber, a father of 3 who was just laid off from his job.

Each person or group had a limited amount of time (broken into 4 weeks of 12 minutes each) to visit simulated local services run by volunteer actors. We dashed from place to place with our fake money and paperwork, facing a variety of setbacks, surprises, frustrations, and injustices along the way.

Of course, no simulation, no matter how immersive or detailed, can offer a true experience of poverty. The closest I have been to poverty was when my family lived in Saint John New Brunswick and experienced the 2 year Irving strike in the 90’s. I remember coming home from school one day and finding weird film equipment in the living room. My Dad was interviewed about the brutal slog of walking the union picket line day in and day out. The film crew followed us to the grocery store to document how we had changed our shopping habits to try to make ends meet and bring enough food home. Mom says we also borrowed food from my aunt during that time.

I was very young back then, so I don’t recall those years as vividly as my parents, but I do remember their frustration. Still, for as long as I’ve lived I’ve had enough food, water and shelter to live a comfortable life, even during the times that my family encountered struggles like the strike. I am thankful for the full and peaceful life I live, and aware that I am lucky to have many privileges and supports that beneficially contribute to my life.

While a simulation could not give anyone a full perspective of what it is like to live in poverty, this is a very worthwhile workshop, because it gets participants thinking about all of the compounding barriers that can make it so hard to get out from under the poverty line. CAPS sensitizes participants to the realities of poverty and homelessness. After the role-play was done, we sat in a large circle and shared our insights and experiences.

Here are a few take-aways from the workshop:

Most of the people participating in the workshop worked in public and social services and outreach, but I think this kind of simulation would be especially enlightening and enriching for those who do not as regularly encounter people who are homeless and living in poverty. Many prejudices and stereotypes persist regarding these populations, and so it is important that people have the opportunity to be sensitized to the truths that exist behind the unfortunate stigma.