Last night I watched A Silent Voice, the anime adaptation of the manga by the same name. I’d previously read the first volume of the manga, so I had an idea what the movie was about and expected it to be an emotional film, but it surprised me with its masterful and deliberate techniques. It brought a few tears even to my eyes, and I very rarely am able to cry.

A Silent Voice focuses on the relationship between Shōya, a young man who was once a habitual bully, and Shōko, the deaf girl who used to be his favorite person to tease and bother. The movie weaves naturally between the memories of the past and the raw emotions of the present day, wherein Shōya is trying to make amends for the callousness of his past actions.

Many moments of the movie hinge upon the subtleties of communication and mixed messages— through spoken word, written word, and sign language. It also touches upon the delicate ties maintained between former friends and acquaintances, and how efforts to rekindle or mend former friendships can open oneself to vulnerability and shame.

At the same time, A Silent Voice highlights the maturity and bravery of making choices that open up this vulnerability, and the struggles and rewards that are born of it. The deeply personal messages of the film, as well as the several gutdropping and heartstopping moments throughout, punctuated by moments of silence and crescendo, make for a truly thoughtful and moving film.

The following is an email I received recently from a co-worker (shared with permission):

I had a patron make a comment about a new manga series we received, called Trinity Seven. The patron told me that most Japanese manga are quite explicit and that these items should not be out for children to see. The items in question do have warning labels on them, however the covers are very suggestive and they were displayed on one of the panels facing the stairs…

The manga in question were on our New Titles Display on the second floor of the library, which is a quiet floor and houses our teen and adult collections.

However, I very strongly disagree with the sentiment that “most Japanese manga are quite explicit”.  Certainly some are explicit, very much so. There are tons of explicit manga out there. But there are also tons of manga that aren’t explicit- manga on a wide range of themes and topics. My library has manga titles for all ages.

Just as with other comics and graphic novels (or books, or audiobooks, or DVDs!) , manga are a format, not a genre. Manga are generally quite heavily influenced by Japanese style and culture, but within the world of manga there are titles in any genre imaginable.

Family friendly, romance, horror, action, mystery, informational, slice-of-life, humour, fantasy, I could go on and on.

When we visited Japan last year (BEST 3 WEEKS OF MY LIFE, YO), I saw manga comics and characters everywhere- in advertisements, as mascots, in cafe and restaurant themes, informational signage, decor, art installations, convenience stores, and in the hands of people young and old.

Here are just a few manga series that I have enjoyed that might challenge what many people think of when they think of manga:

Rinko doesn’t think she’s that bad-looking, but before she knew it, she was thirtysomething and single. Now she wants to get married by the time the Tokyo Olympics rolls around in six years, but that might be easier said than done!

Akiko Higashimura is one of my favorite mangaka. If you haven’t read Princess Jellyfish yet, you should- it’s hillarious. Similarly, this newer series is also just as hilarious and is filled with a cast of interesting, mainly female, characters. It’s refreshing to see main characters who are in their 30’s, as many manga focus on the high school demographic.

Years ago, Shoya Ishida led his peers in tormenting a hearing-impaired classmate, Shoko Nishimiya. When she transfers schools, Shoya finds he has gone from bully to bullied, and is left completely alone. Now Shoya struggles to redeem himself in Shoko’s eyes and to face the classmates who turned on him.

This emotional drama is one of the most critically-acclaimed manga of the decade, earning an Eisner nomination and accolades from teachers and the American Library Association. An animated film adaptation from Kyoto Animation has swept the globe, arriving in US theaters in October 2017.

“A very powerful story about being different and the consequences of childhood bullying … Read it.” —Anime News Network

“The word heartwarming was made for manga like this.” —Manga Bookshelf

Source
The unique plot of this manga drew me in. It’s certainly different than the types of stories I usually read, but it touches on important themes of bullying, isolation, shame, and wanting to make things right.

The best selling and most beloved food manga of all time!

As part of the celebrations for its 100th anniversary, the publishers of the Tōzai News have commissioned the creation of the “Ultimate Menu,” a model meal embodying the pinnacle of Japanese cuisine. This all-important task has been entrusted to journalist Yamaoka Shirō, an inveterate cynic who possesses no initiative—but also an incredibly refined palate and an encyclopedic knowledge of food.

Oishinbo is one of the first manga that I read which challenged my own preconcieved notions of what manga could be. It is funny, informative, and well written. For those who want to learn about Japanese food and culture, this manga is highly recommended. Fans of films like Jiro Dreams of Sushi and The Birth of Sake will love Oishinbo. 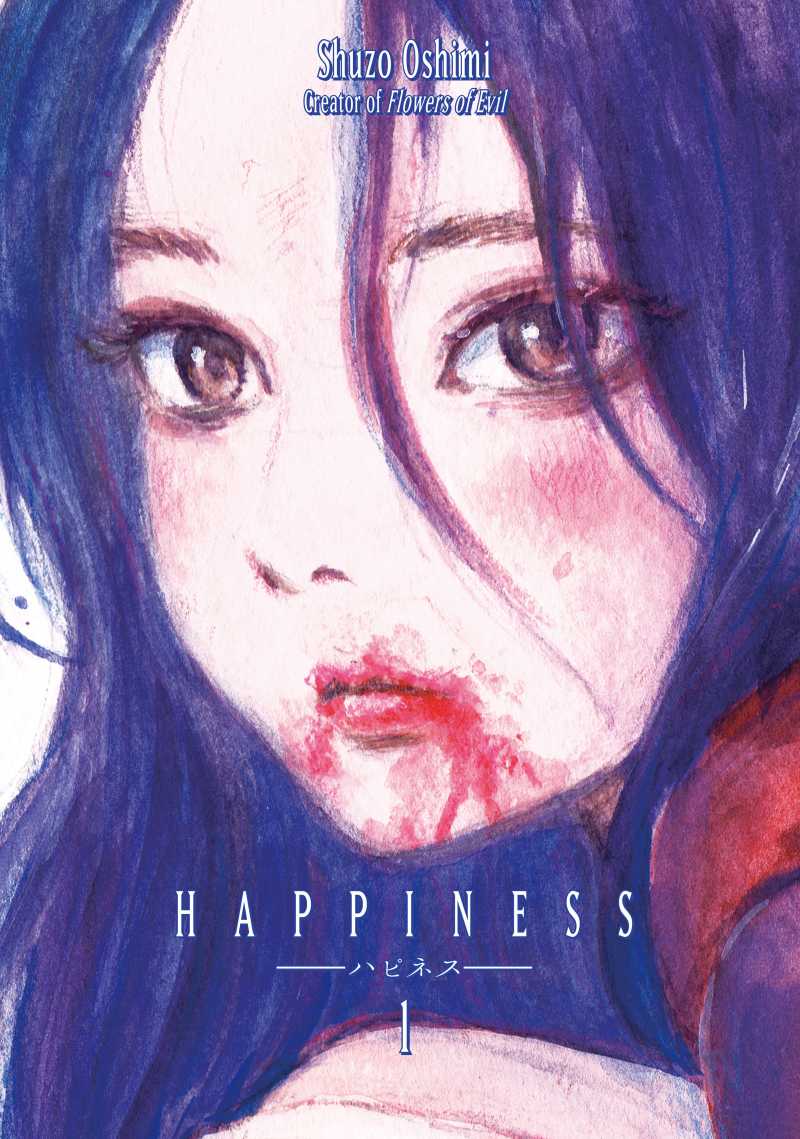 The latest foray into the darkest corridors of adolescent dread—with vampires—from manga master Shuzo Oshimi (The Flowers of Evil).

Nothing interesting in happening in Makoto Ozaki’s first year of high school. HIs life is a series of quiet humiliations: low-grade bullies, unreliable friends, and the constant frustration of his adolescent lust. But one night, a pale, thin girl knocks him to the ground in an alley and offers him a choice. Now everything is different. Daylight is searingly bright. Food tastes awful. And worse than anything is the terrible, consuming thirst. The tiny shames of his old life have been replaced by two towering horrors: the truth of what will slake his awful craving and high school itself.

I absolutely adore vampire stories, and Happiness was certainly a happy find for me. I love the unique art style of Shuzo Oshimi, and this vampire tale feels more realistic than many I’ve read.

Fans of horror should also definitely check out the works of Junji Ito!

Saved from a hard life on the streets by a caring ramen shop owner, former kitten model Taishou now takes pride in his noodles and shows little tolerance for dissatisfied customers. Original.

This is a manga I happened upon in a bookstore and simply had to read. It has a special kind of absurd humour- I especially love how Taishou’s main customer, Tanaka, breaks the fourth wall from time to time because he realizes how completely absurd Taishou’s various shop-improvement ideas are (not to mention the fact that he is a cat… running a ramen shop… something that Taishou doesn’t seem to notice or care about!)

Neko ramen features lots of small story arcs and yonkoma (4-square panels), so it is a convenient manga to read if you want something you can put down and pick up again easily on work breaks, between bus rides, etc, but if you’re like me you’ll devour each volume in one sitting!

Hello! This is Koiwai Yotsuba, Yotsuba Koiwai…um, YOTSUBA! Yotsuba moved with Daddy to a new house from our old house waaaaaaay over there! And moving’s fun ‘cos people wave! (Ohhhh!!) And Yotsuba met these nice people next door and made friends to play with (one of ’em acted like one of those bad strangers Daddy told Yotsuba not to go with, but it was okay in the end). I hope we get to play a lot. And eat ice cream! And-and-and…oh yeah! You should come play with Yotsuba too!

Yotsuba took me by surprise. I read it because I wanted a quick read and my library had multiple volumes. I got hooked on the stories of her antics, especially because they gave me real, true belly laughs. Yotsuba feels more like a real kid than any child I’ve read in print. Kids truly say and do the darnedest and most unexpected things.

ABOUT MY BROTHER’S HUSBAND, VOLUME 1

Yaichi is a work-at-home suburban dad in contemporary Tokyo; formerly married to Natsuki, father to their young daughter, Kana. Their lives suddenly change with the arrival at their doorstep of a hulking, affable Canadian named Mike Flanagan, who declares himself the widower of Yaichi’s estranged gay twin, Ryoji. Mike is on a quest to explore Ryoji’s past, and the family reluctantly but dutifully takes him in. What follows is an unprecedented and heartbreaking look at the state of a largely still-closeted Japanese gay culture: how it’s been affected by the West, and how the next generation can change the preconceptions about it and prejudices against it.

This is a sweet, sad, and thought provoking story. Curious young Kana, asking questions without a filter as children do, acts as a provoking force for Yaichi in addressing topics that might be considered uncomfortable to discuss in Japanese culture today.

Toshinari Seki takes goofing off to new heights. Every day, on or around his school desk, he masterfully creates his own little worlds of wonder, often hidden to most of his classmates. Unfortunately for Rumi Yokoi, his neighbor at the back of their homeroom, his many games, dioramas, and projects are often way too interesting to ignore; even when they are hurting her grades.

My Neighbor Seki is one of those manga I bought on a whim, and I’m glad I did. I definitely identify with Rumi, the student who just wants to pay attention in class but keeps being distracted by her classmate’s Rube-Goldberg type creations. The humour is magnified by Rumi’s incredulous inner dialogue, the obliviousness of the teachers, and the silent but ever-escalating antics of Toshinari.

I love learning about new series, especially ones that are unique or unconventional, so please leave me a comment if you have any recommendations, dear readers!