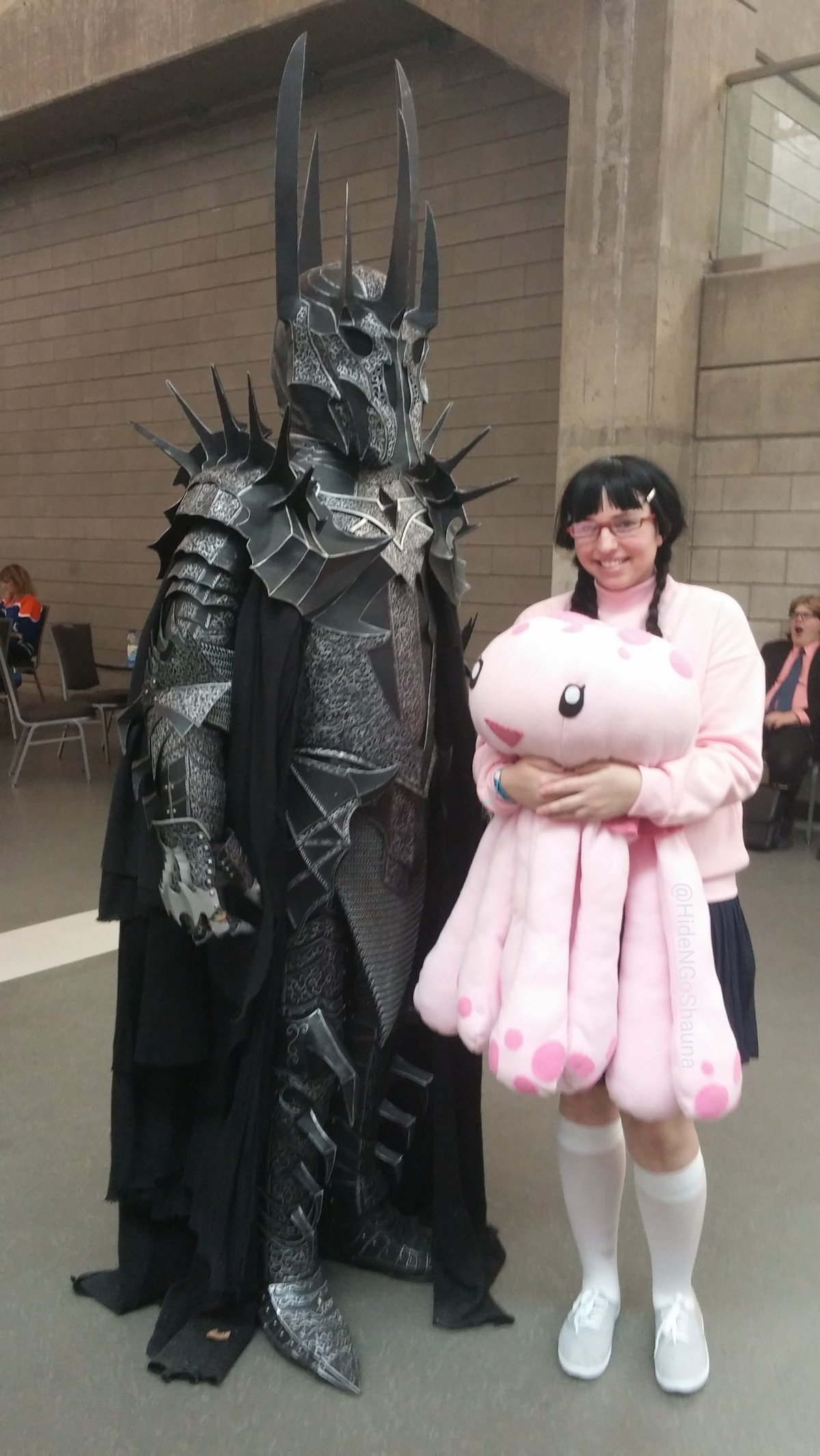 Yesturday I came across this post by TheGamersJourney which is a response to a challenge by TheCosplayingBrooke and it inspired me to share my own thoughts on cosplay and why I enjoy it!

Cosplay is a total mystery to some people- why do we dress up as these characters, painstakingly crafting elaborate costumes, weapons and accessories? It’s expensive, it’s a lot of work, and some people look down upon it as being childish or cringey. 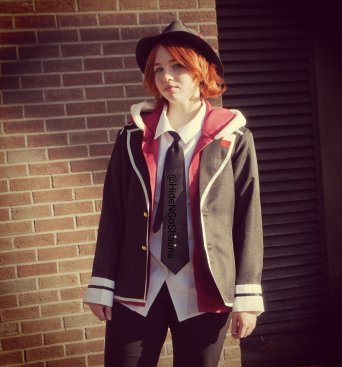 A little on my cosplay history…

My first time cosplaying was at Edmonton Expo in 2015. It was my first con ever, and I went as InuYasha. While my costume was designed by the amazing SkyCreation on Etsy, everything else was of my own making- the Tetsusaiga sword was my first weapon build, and it got tons of stares and photos- it was almost too long to fit in our truck!

A lot of my blood and sweat went into that Tetsusaiga… cutting glued industrial foam with an xacto knife is a dangerous business o.o

InuYasha’s long haired wig was a pain in the butt, but luckily the ears I made worked well when sewn into it. I tried creating my own Beads of Subjugation with clay but they ended up being ridiculously heavy, so strung together some store-bought beads instead. I learned the trick of making realistic fangs out of acrylic nails and I’ve never looked back! 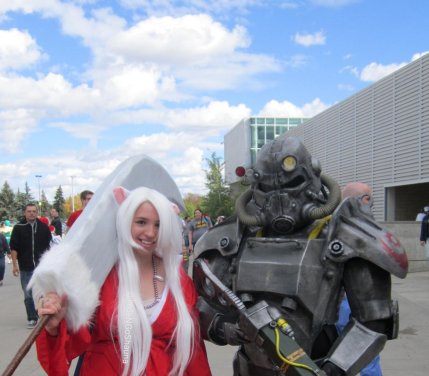 After cosplaying as InuYasha I was hooked, and I have since cosplayed Rin Matsuoka, Laito Sakamaki, Tsukimi Kurashita, and soon Krul Tepes (in progress)! 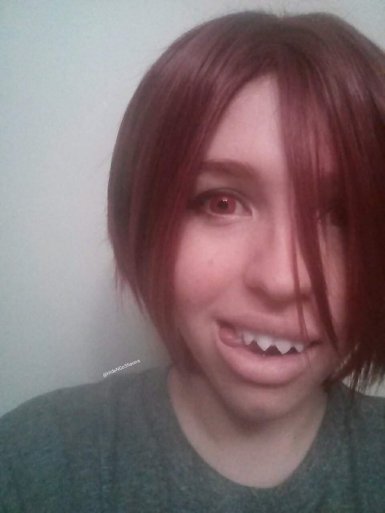 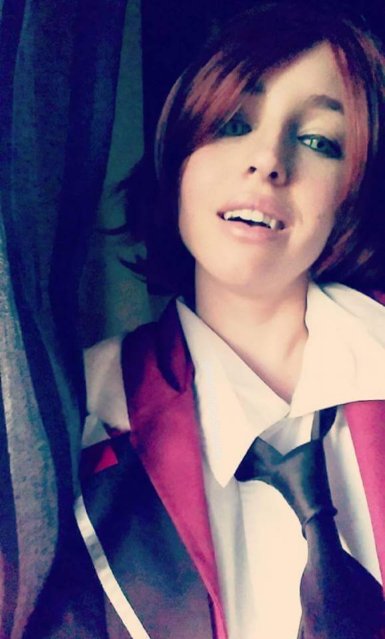 What inspires you to cosplay?

Usually I choose a cosplay project because I absolutely love the character- whether that’s a character that I am attracted to (my initial cross-plays of InuYasha, Rin, Laito) or a character that I admire or feel an affinity towards, like Tsukimi from Princess Jellyfish.

I have also started looking more at the aesthetics and style of a character- it’s especially fun to portray a character that has a unique and eye-grabbing style. For example, I cosplayed as Laito because he is my favorite character from Diabolik Lovers, but I almost chose to cosplay Kanato because he has awesome purple hair, his plushie Teddy, dark facial features that would be fun to replicate with makeup, and a really cool outfit. 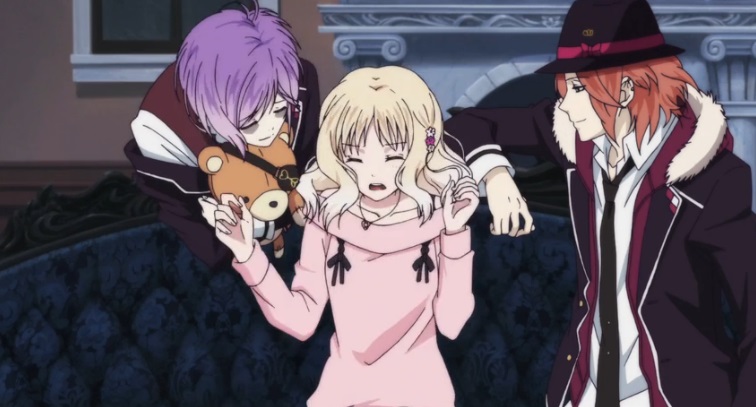 On the flipside of this, after having lots of struggles with long wigs, I might reconsider any future cosplay choices if they have crazy long hair!

I also consider the feasability of creating the costume- i’m still a beginner at sewing and crafting, and although in the beginning I purchased some of my pieces from online sellers, my goal is to create all of my costumes and accessories myself going forward.

Cosplay was on my radar ever since I was a young kid, I think. I’m sure I didn’t know “cosplay” was a word back then, but I used to dream about dressing up as the blue Power Ranger or Sailor Mercury. I used to pretend to be these characters when I was playing with my friends, but there was always this yearning to wear the costumes and take on the role of someone else.

Halloween was thrilling for me, and I’ve loved getting into costume for school plays and things like that- cosplay was a natural progression, I guess.

What does cosplay mean to you and what does it bring to your life?

Cosplay does lots of things for me. It gives me a new way to be creative and learn new skills- I’ve designed my own accessories and weapons, learned how to use a sewing machine, dabbled with costume and sfx makeup, and improvised materials and costume fixes.

It also gives me an immediate sense of community. As soon as I stepped into the expo hall as InuYasha, strangers began approaching and complimenting my handicraft, expressing their love of the series, and so on. I call conventions “being with my people” because it’s so fun to feel completely free to dork out and celebrate that dorkiness with others.

I love seeing diverse people of all different backgrounds and abilities, from all walks of life, young and old, coming together in celebration and shenanigans because of their shared geekiness. It’s a beautiful thing to be a part of! 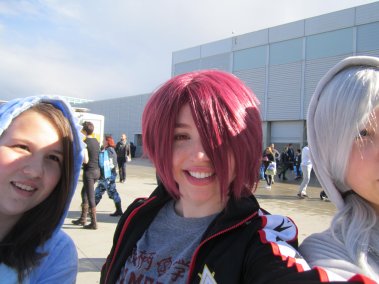 Who do you cosplay for?

I cosplay for myself, because I truly enjoy it, and also for the geeky community that I meet at things like conventions. Just as I feel excitement approaching someone who is playing one of my favorite characters, I love it when I see and hear excitement from others about my cosplay. When people ask to get a picture with me, it makes my day. There is something so special and magical about being tapped on the back by Miroku when I am browsing anime dvds at a giant nerdy tradeshow, and getting a picture together! 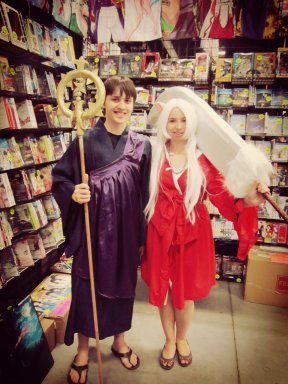 Is cosplaying freeing for you, either to be more yourself or explore different parts of yourself?

Being around like-minded people certainly does make me feel freer to be my squeeful fangirl self without restraint. Since starting my cosplay journey I feel more confident being bold and sharing my individuality even when i’m not surrounded by other geeks. It’s empowering!

Cosplay also allows me to bring a bit of the theatrical into my life. On the one hand, I get a chance to play with my own look and take on aspects of characters I find similar to myself. On the other hand, cosplaying a character like Laito, who has a personality much stronger than mine, is a lot of fun. 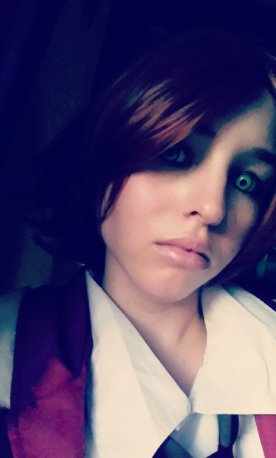 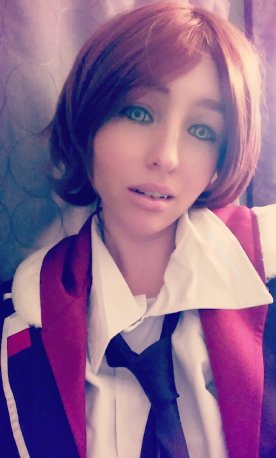 Participating in cosplay competitions is very rewarding even when you don’t win anything, and I am planning to continue signing up for them in the future! It’s not often I get to be on stage with hundreds of people watching me. It’s a crazy experience. 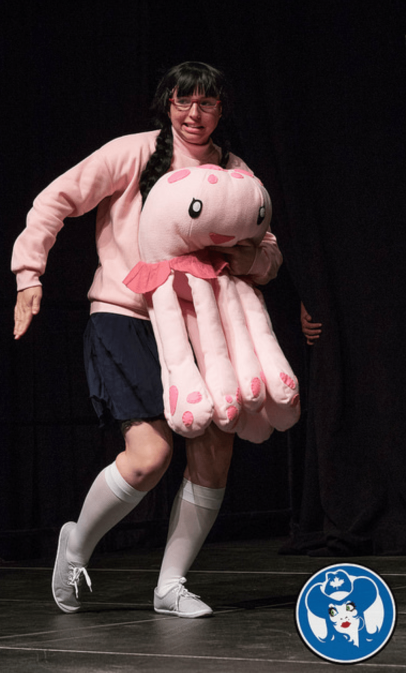