Normal Happenings has tagged me in another of their awesome Daily Inkling challenges, and this one is really fun:

Write a terrifying fictional monster… and then tell us its greatest weakness.

I will admit, I spent over an hour exploring some creepy subreddits and creepypasta looking for inspiration to get me in the mood, and I drew a few ill-fated attempts at creepyness, but it just wasn’t working. I wasn’t feeling anything, and my drawings were junk.

Then I remembered a terrifying memory from my childhood that had been dormant and forgotten for some time… I didn’t need to come up with something, because it had already haunted my childhood nightmares…

Did you ever watch Goosebumps? I was a huge fan when I was a kid, of both the books and the show. I begged my Mom to sign me up for some sort of fan club that sent Goosebumps packages with jokes and stickers and stuff in the mail (she eventually relented.) I forced my entire family to save up the tabs of their Kraft Dinner boxes for weeks so I could mail them in to get one of the special limited-edition prizes – a rubber Slappy hand puppet. I had an audio cassette of Deep Trouble that I listened to over and over again as I lay on my waterbed gleefully imagining the watery depths swallowing me up. 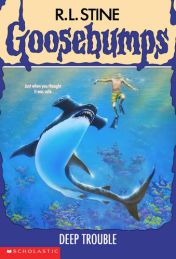 I considered myself to be a pretty tough kid when it came to scary stories, and none of the Goosebumps books or episodes really phased me… until…

I can’t remember the specifics of the episode. I don’t recall the context or background of the story that unfolded, or the intents of the characters. All I remember is the THING.

The THING changed my eating habits for weeks. My parents and grandparents were worried about me and the obvious effect that the episode had had on my impressionable mind.

A quick bit of internet sleuthing tells me that the episode was called It Came from Under the Sink, and that the creature of my nightmares was called a “Lanx”.

I, however, referred to it simply as…

Yup, this thing majorly freaked me out. I was a kid who loved to eat, and I guess the idea that something as sacred as a common potato could be tainted so utterly blew my little mind. At the very end of the episode it was revealed, teeth gnashing, and I wouldn’t eat my mashed potatoes (a regular staple) for weeks.

So, what is the weakness of THE POTATO?

Time, I suppose. After a while I got over my fear of THE POTATO- hunger trumped fear, in the end.

Another thing that helps?

Ok, actually he is kinda creepy too, in his own way. Ah, well.